What is a Decimal

A decimal number is a number in the base 10 positional notation system which contains a decimal point between the integer part and the fractional part.

For example, the decimal number 29.31 has 29 as integer part and 0.31 as a fractional part, separated by the decimal separator.

In contrast, every rational number is terminating or repeating, and can be written as a quotient p/q of two integers, p, q \epsilon\mathbb{Z}, q\neq 0.

All numbers in \mathbb{Q} are either terminating decimals like 0.125, or repeating decimals with an infinitely repeated pattern in the fractional part.

For example, 0.08333… is a repeating decimal which is usually written as 0.083; the overlined number 3 indicates that the sequence of 3s never ends.

To convert decimals to fractions the decimals must be rational. Depending on the decimal fraction under consideration, proceed by using the corresponding method below:

Convert a Terminating Decimal to Fraction

All terminating decimals can be changed to fractions by

Make sure to understand what the gcf stands for by following the link above. If the gcf(p,q) of any fraction equals one, then the fraction is already in simplest form.

Our frequent, detailed conversions might as well serve as examples:

Now it’s your turn: Convert 1.55 to a fraction in lowest form and check your result using our calculator.

Convert a Repeating Decimal to Fraction

All repeating decimals, which are non-terminating, can be changed to fractions, we a bit of algebra:

Note that our calculator cannot only handle all rational numbers, repeating as well as terminating, but it will also present you an approximation if your decimal number is irrational.
Don’t forget to bookmark our tool now as decimal to fraction calculator.

You can also look for many decimals to fractions conversion by using the search form in the sidebar. And here you can find the inverse operation, fraction to decimal.

This brings us to the end of our article decimal to fraction. We have tried to explain you all on how to convert a decimal to a fraction, writing decimals as fractions and convert decimals to fractions in an straightforward way.

We sum decimal to fraction with an image: 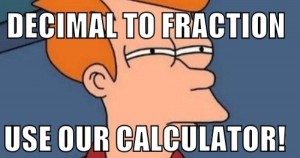 Thanks for visiting our math site.